This post is a walkthrough on setting up a JVM service for continous integration & automatic deployments coupled with safe rollbacks.

What that means is, you can set things up such that every commit runs your test suite. If tests pass, it gets automatically deployed to a target environment. Things get even better with branching. For example, if you use git flow as your branching model, you can wire it up such that commits on develop branch get pushed to your beta/dev server and commits on master go to production server... automatically. You also get an ability to rollback your service to a previous version.

Lets first do a quick review of the primary things we're working with:

Use the AWS Console and create an Elastic Beanstalk Application and Environment. You can read more in Amazon documentation but to put it simply: an Application is, well your app and it can contain multiple Environments like dev/stage/prod. You actually deploy your stuff in your application's environment. Comprende?

It should be pretty straightforward to set it up but here is a quick walkthrough video of the options to choose:

As you set this up, be sure to make a note of these 3 things which we'll need later to configure deployment in Codeship:

You may want to checkout the sample which Elastic Beanstalk deployed to your new environment by going to the url displayed top in the AWS Console. In the above walkthrough it is http://glugbot-demo-env.elasticbeanstalk.com/ Remember, we will be updating this to our service via codeship!

Get your service code in Github

Codeship will monitor commits on your service code to trigger deployments. So lets put a simple Scalatra service in your Github account. For that, you could either

Setup your project in Codeship

Setting up your project on Codeship is so easy; its downright beautiful :) Here is a walkthrough where Codeship takes your Github project and does the first build/test:

At this point, you already have continuous integration working!

Configure Codeship to use eb-deploy

eb-deploy script needs to know a few things about our app, to be able to deploy it. This includes the 3 things we'd called out above: our app's Elastic Beanstalk Application, Environment, Instance Profile. It also needs the WAR file location, the build number and your AWS keys.

eb-deploy can take all that information either as commmand line parameters or as environment variables:

The way we'll set this up in Codeship is pass the IAM profile, application, environment and WAR file location as custom environment variables:

This is done in Codeship's project settings as below:

The build number is provided by Codeship as a default environment variable called CI_BUILD_NUMBER and eb-deploy uses that directly so there is no need to configure it explicity.

We can setup AWSKey and AWSSecret as environment variables too. However, if there are security concerns on exposing them, we could commit a file in our code which invokes eb-deploy and passes the AWSKey and AWSSecret as command line options to eb-deploy. Since codeship destroys the entire VM it uses to perform our build, its a pretty safe bet that the keys are better protected that way. Of course, you do have to put it in your code though. If you don't wanna do that, then just define them as environment variables.

Lastly, we just need to invoke eb-deploy from codeship. Thats done from the Depoyment tab in Codeship as below: 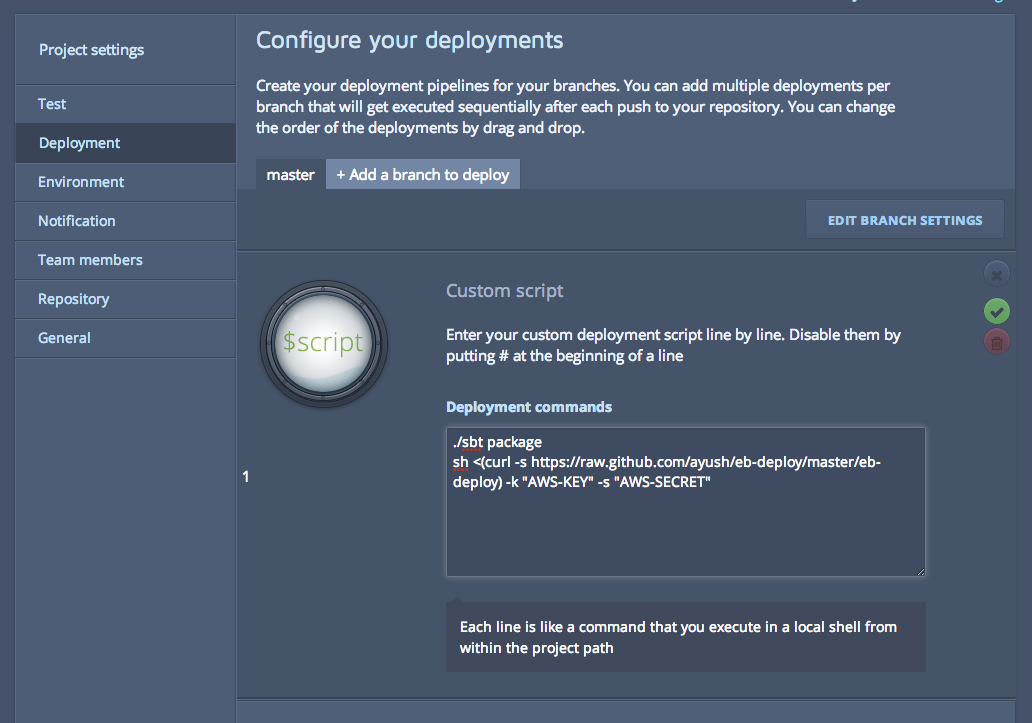 Here are a few possibilities on how you can invoke eb-deploy:

Now when you commit and push to github, codeship will automatically build, test and deploy your app service to Elastic Beanstalk. Here is a demo of that in action:


## Deploying branches to different servers To deploy a branch to another server, just use Codeship's [branch specific deployment piplelines](https://www.codeship.io/documentation/continuous-deployment/deployment-pipelines/), to setup another branch's deployment.

Where the mem at?

This post is for application developers who need to figure out where memory is going on a server. An…